I have written about Think Floyd many times before here, here, here and here. Really, with a busy lifestyle and bands not playing on the weekends, they’re the only band I follow regularly (apart from Indian Ocean, who don’t seem to play at Delhi anymore).
They recently announced their first gig of 2012, again at Hard Rock Cafe, Delhi. I had many things going against me this time. I had cold and fever, I had to go to office early the next day, it was the end of the month and I was short on money, but none of that stopped me. After swallowing a crocin, I reached the venue sharply at 21:30, waiting for the show to begin at 22:00.
Their on-stage lineup last night
Anindo Bose: Keyboards
Abhishek Mathur: Guitar and Vocals
Rohit Kulkarni : Guitar and Vocals
Chintan Kalra : Bass and Vocals
Aveleon Vaz : Drums
The Guy whose name I always forget : Sax
Here’s the set they performed, with a break in between
Side A

June 30th, 2011 was a day I had waited for a long time. Think Floyd performed for the second time in Hard Rock Cafe. I had informed everyone of my absence from the other responsibilities of life days ago, as soon as the dates were announced. The concert was slated to start at 10:00 PM, we reached there at 07:00 PM, waited till 8 to get the tickets. The concert actually started around 10:30 PM.
For those who don’t know about the band, read my last post or facebook fan page
https://thescurvydawg.com/2010/05/22/the-great-gig-in-hard-rock-cafe/
http://www.facebook.com/thinkfloydindia

I had a few apprehensions on what the playlist would be like on this occasion. My minimum requirements were Dogs, Sheep, Echoes, Shine on you Crazy Diamond & of course, whole of Dark Side of the Moon.
Un-like last time, the concert started with Coming Back to Life, followed by Poles Apart and then High Hopes. Just when I was yearning for some classic(old) Pink Floyd songs, they Started with Dark Side of the Moon and played the whole album, just like last time.
While they were playing, I started looking around the crowd, hoping to catch a glimpse of Vasundhara Vee, who sang the part last time; however, I could see no signs of her. We were all surprised when the Sax guy (whose name I never heard or forgot) played the vocal parts on his Sax. It was simply amazing and played perfectly. All in all, I can safely say that “The Great Gig in the sky” was the song which surprised me most both the times.
After this came the mandatory alcohol top-up break after which they started with Echoes, followed by Sheep, Dogs, Shine on you Crazy Diamond, finishing with comfortably numb.
A few differences from last time

Overall, a very satisfying experience. I hope they do play “Careful with that Axe Eugene” next time.
More than a year ago, on Thursday, May 20, 2010 something legendary happened. Think Floyd played at Hard Rock Cafe Delhi and changed our lives forever.
For people like us who would never see Pink Floyd live, this was the next best thing, and the best thing we can get ever. I covered this event on this blog a couple of days later
https://thescurvydawg.com/the-great-gig-in-hard-rock-cafe/
One reason the evening was so special was we had mediocre hopes from the concert and instead they blew us away. We didn’t expect a Sax player or Vasundhara singing “Great Gig in the Sky”.
Since then, we have all been waiting for a reprise, and after more than a year the dates have been announced. It’s June 30, the same venue at 9:00 PM (right!!)
http://www.hardrock.com/live2/eventDetails.aspx?LocationID=542&eventID=49111&MIBEnumID=3
With expectations already so high, will the band exceed expectations again or fail to live up to it’s expectations? Only June 30th will tell and we will be there.

Thursday was one of the greatest evenings I have ever had. Me and goru headed out to Hard Rock Cafe to witness the performance of Think Floyd. Of course expectations were high as it was a Pink Floyd tribute band and we had been waiting for over a week for this. Add to that the un-certainty that we may be thrown out because we were not a “couple”. The band that night chiefly consisted of
ABHISHEK MATHUR : GUITAR & VOCALS
ANINDO BOSE : KEYBOARDS & COMPUTERS
CHINTAN KALRA : DIRECTOR, BASS & VOCALS
SUROJIT DEV : DRUMS
NICOLAS GIORDANI : SAXOPHONES
ROHIT KULKARNI : GUITAR & VOCALS
VASUNDHARA : VOCALS 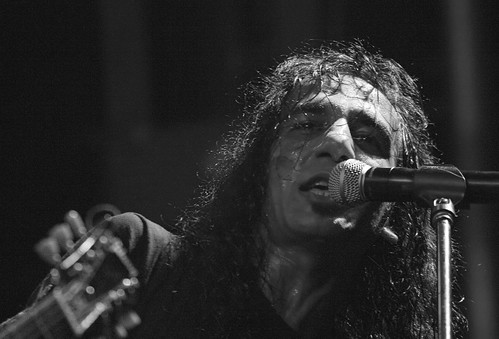 Let me tell you that Chintan Kalra (of Parikrama fame; pictured above) not only looks like Roger Waters but sings like one too. In fact you can think of him as a bulkier waters or a thinner Springsteen. Anyways, the guy was a showman!!
The gig was to begin at 9:30 but started at 10:30. We were apprehensive because we thought the gig starting late meant a smaller playlist (boy were we wrong). As expected, they began with Shine on you Crazy Diamond, playing all parts perfectly; complete with a Sax solo by Nicholas.
Next came Astronomy Domine. When you go to concerts with bands playing, you expect commercial Floyd songs mainly Coming back to life. Never though did I expect them to play songs from Animals. But they did!! Next came Sheep (at which point I went mad) followed by Dogs (completely Hysterical). They even played Echoes (both 1 AND 2 goddamnit!!) They followed it up with Poles apart from Division bell and the compulsory Another Brick in the wall (all parts) and mother and other songs.

Next came a short break (at which point I realize that they haven’t played a single song from Dark Side of the moon!! When they next came on stage, after a song, my ears are treated to the familiar heart beat.
They start out with Speake to me/Breathe, and play every single fucking song of the album. Time was awesome with an added solo but the greatest surprise of the evening was the great gig in the sky featuring vocals from Vasundhara. Well, I had never thought I would see an Indian woman perform this song live, but she did!! When she began singing, the crown went into hysterics. No one could believe the voice on that girl. She sang the song perfectly with her voice reaching highs and lows un-imaginable by a normal singer.
After that came Money and Us & them (again with Nicholas on the Sax), any colour you like, Brain damage and eclipse. The band finished off with Wish you were here at around 1:30 morning.
By the end of the concert, our throats were completely seized up and we were in a state of shock. Next morning, I could recollect events from the previous night like a dream. Couldn’t believe whether it was true or just a dream. All in all, it was an experience of a lifetime. It makes me shudder to think what would have happened if we had witnessed an actual Pink Floyd performance.
Turn offs: Girls wearing revealing clothes “sitting” on the front row, blocking the view and talking amongst themselves while the band performed. For me, it was sacrilege. Would prefer concerts in a less formal atmosphere, maybe at an open ground.
Another turn off – guys fetching drinks for these girls, pushing their way around while the band was playing, blocking views and disturbing the trance that we were in.
PS: We also learnt about the three “P”s in life we should all yearn to attain!!