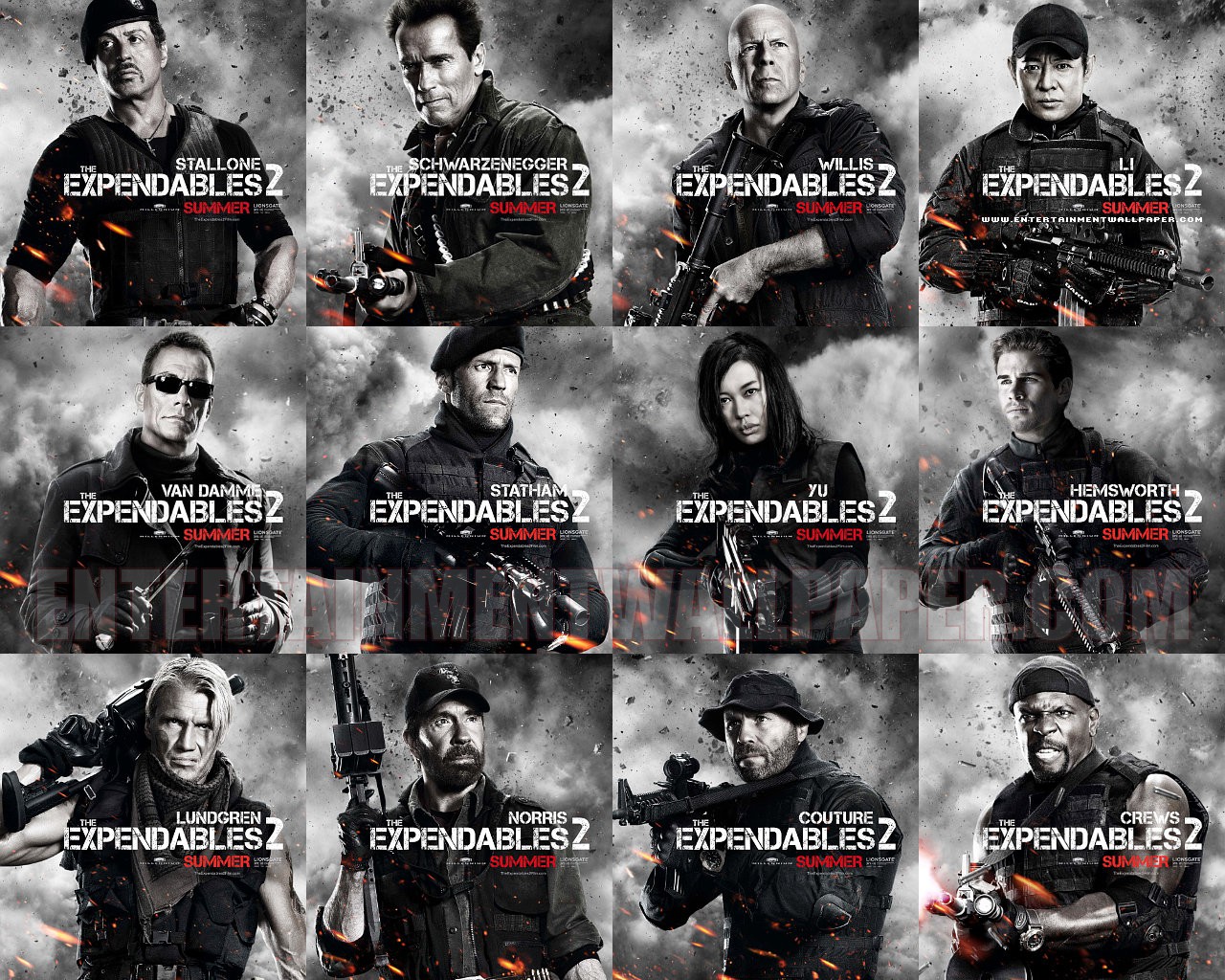 I remember that in 2010 I went to watch “The Expendables” with high hopes (being an epic Sylvester Stallone fan) and came back just satisfied. The story was predictable, the action sequences were too over the top and mostly unrealistic. But it was an all-out action movie which did not bore. It was a one-time watch.
After 2 years, Stallone is back with a sequel. The story is even more predictable and the action sequences are entirely unbelievable. The good guys easily miss a hailstorm of bullets, while the bad guys die one-guy for one-bullet. They easily use high-tension power cables as zip lines (The pylons be damned), people turn up at the most un-expected places suddenly without warning and disappear without any explanation and it is decided that the best way to enter a mine is by crashing flying/driving an airplane through a mine-shaft. It is clear that instead of a story being written first and then scenes shot accordingly, they just shot the scenes as they pleased and hoped that the audience will forgive the massive gaffes and unexplainable events.
I being an audience easily forgive them. I spent most of the late 90s and early 2000s watching action movies. Sylvester Stallone has always being an idol and my most favourite actor. I have seen each Rocky movie at least 30 times. I have seen the entire series (at that time 1-5) overnight at one go. Similarly, I have seen the Terminator series (at that time 1 and 2) many many times, not to forget the Die Hard series. Those were also the days when Van Damme ruled the martial arts scene in Hollywood. They showed Bloodsport on Star TV every month and I watched it in its entirety every time.
There were mostly 2 types of action star fans back then. The ones who supported Sylvester Stallone and the ones who supported Arnold Schwarzenegger. I used to frequent Sylvester Stallone fan chat rooms back then and witnessed (and participated) in many arguments as to who will win if Sylvester and Arnold ever came face to face and who can kick the others ass more. The rivalry was legendary, even portrayed in some movies (Arnold becomes President of the USA in the dystopian future of The Demolition man and Sylvester’s character has a hard time believing it). Most arguments used to end with the same conclusion -“They are never going to do a movie together, so there’s no point arguing”. That has been the childhood dream of every Action movie fan of my generation – to watch Sylvester and Arnold together in a movie.
This movie not only fulfils that fantasy, but far exceeds that. Never would I have thought I would watch a movie with my favourite actors of all time – Sylvester Stallone, Arnold Schwarzenegger, Dolph Lundgren, Bruce Willis and Van Damme together. Don’t be mistaken, they don’t have cameos in the movie. They all have substantial roles with the last action scene bringing them all together.
Look at the screenshot below
Is that scene not perfect? What else can be more pleasing to the action lover’s eye, than watching Arnold, Sylvester and Bruce walking in unison and mowing down bad guys with their machine guns? Pure cinematic bliss.
So what if Sylvester takes down a helicopter flown by the bad guys with a moped (results in an explosion of epic proportions), but their own plane crashes and digs its way miles into a mine without so much as a fire?
So what if the movie actually has a sniper which fires 6 rounds in under 2 seconds?
So what if Chuck Norris destroys 20 people and 1 tank with just a gun? (Actually this one is not hard to believe at all)
So what if Sylvester Stallone easily defeats Van Damme in hand-to-hand combat?
We don’t care. Just look at the screenshot above. We don’t want anything else. We are glad Arnold’s political career has been shamefully destroyed and he can make movies now.
Surely, this movie will not win any awards (or even be nominated) for story, direction or acting. This movie was not meant to be appreciated by critics, be appreciated as a piece of art or win any awards. This movie was just made to please action movie lovers like me and those belonging to a generation before mine, which it does.
RIP Sage Stallone, who passed away last month due to drug overdose.